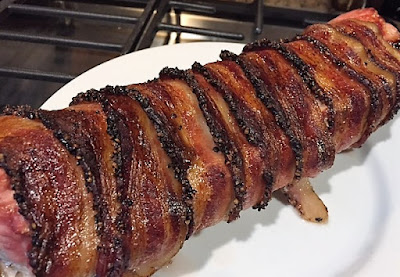 We were at or local Butchers, Ponderosa Provisions and noticed they had pepper bacon, so we grabbed a pound and a nice looking smallish pork loin.  We decided to wrap the pork loin in the bacon and then onto the barbecue.

It was amazing and it is on our dinner rotation now, even leftovers are yummy!

It is more of a process than a recipe:

1 boneless pork loin, the smaller ones work best
1 pound of pepper bacon (we also like Daily's Pepper Bacon)
1/4 cup Maple Syrup (use the good stuff)
salt and pepper to taste

Brush your loin with some Maple Syrup

Add pepper and a bit of salt

Carefully wrap the bacon around the loin

Place on a heated BBQ and cook till the internal temperature reaches 145 degrees, there will be carryover cooking.

Occasionally brush the loin with additional Maple Syrup while cooking. 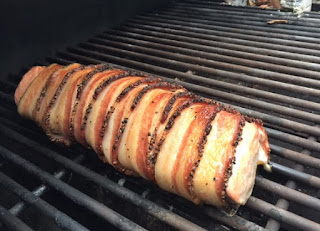