I inventoried the contents of my three freezers, a full size one in the garage, a side by side in the garage and a french door in the house.  I am trying to use what I have inventoried.  I found this skirt steak and decided to have it for dinner.

It is super easy, just salt, pepper and cook on very hot heat.  The compound butter was delicious! 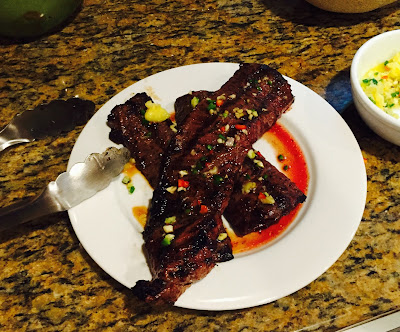 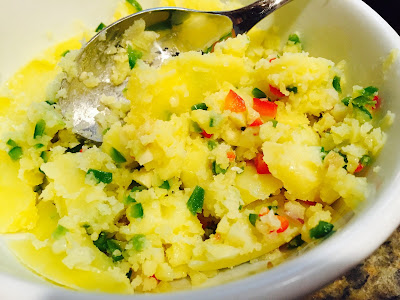 Salt and pepper the steak and squeeze half of a lime on the meat, before cooking.

Cook on searing high heat, on both sides, medium rare, 145 degrees, 4-6 minutes per side and use a thermometer

Leftover butter is great for cooking eggs.
at November 25, 2015 1 comment:

I am an avid watcher of the Food Network show, The Kitchen.  I watched one last week and Jeff Mauro made this delicious Pork Loin and when I found one in my freezer, I decided to make Grilled Pork Tenderloin Al Pastor with Avocado Crema.

It was a little hard to find the Achiote Paste, but my local Tienda carried it.  The flavor of the meat was delicious, for sure it will be a part of my rotation. 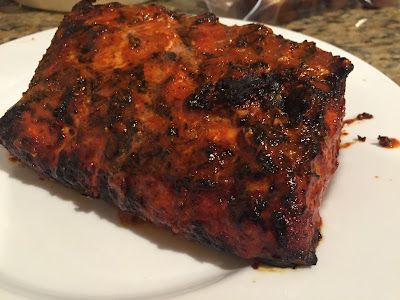 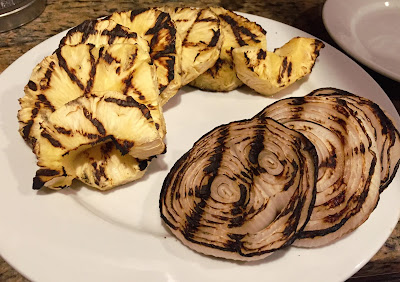 Add the pineapple juice, achiote paste, chipotles, garlic and 1 1/2 teaspoons salt to a food processor and puree until uniform. Reserve about 1/2 cup of the marinade for glazing. Put the remaining marinade and the pork in a resealable plastic bag and marinate for 2 hours in the fridge, rotating if necessary halfway through.

Heat a grill to high heat; clean and oil the grill grates.

Thread the onion rounds on the skewers, drizzle with oil and season with salt and pepper. Grill the onions, developing a deep char on each side, about 10 minutes per side. Set aside to cool.

Lightly season the tenderloins once more, then grill on all 4 sides, frequently basting with the reserved marinade, until golden brown and the internal temperature registers 145 degrees F, 8 to 10 minutes per side. Transfer to a plate, tent loosely with foil and rest for 5 minutes.

Mince the cooled onions and season again. Slice the pork and serve with a dollop of Avocado Crema and garnished with chopped cilantro and charred onions.

For the avocado crema: Put the cilantro, Mexican cream, avocado and lime zest and juice in a food processor and run until smooth. Season with salt and pepper. Cover with plastic wrap pressed on top until serving, to keep the avocado from browning.
at November 15, 2015 1 comment: 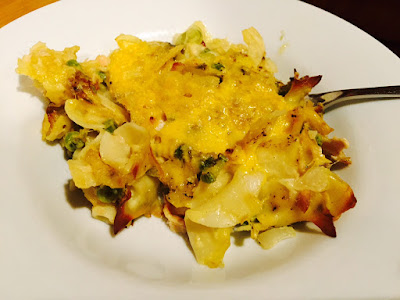 My Sister In Law gave me some fancy Tuna she bought at a Seafood place at the beach. It had Jalapeno's in it, so I thought maybe it would be good in a Tuna Noodle Casserole, which I have not made in a decade at least.

I found a recipe on the web and added in some yummy extra's like bacon, water chestnuts and peas.  The topping was potato chips and cheese.  I am not normally a fan of Tuna Noodle Casserole, but this changed my mind!

Mix the cream of chicken, mayonnaise and milk together in a large bowl.

Fold in the tuna, followed by the cooked egg noodles, mix well

Salt and pepper to your taste.


Place in a casserole dish. Cook at 375 degrees for about 30-35 minutes, then remove and add the topping replace, and cook approximately 10 more minutes, till the topping is crispy and brown. 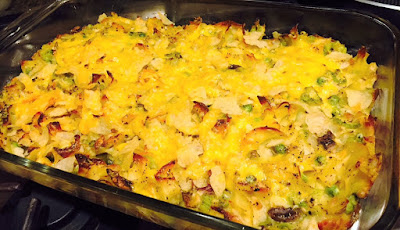