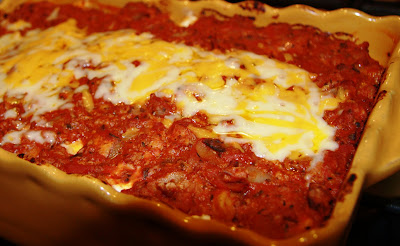 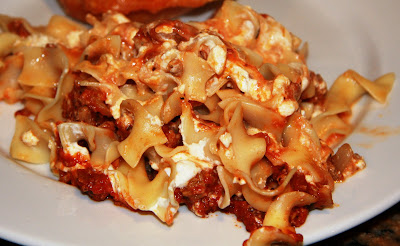 I cannot remember where I found this recipe but with my additions it has replaced my Lasagna recipe which I worked on and tweaked for years! My husband loves it which is a plus!

I have always put cottage and cream cheese in my Lasagna, not traditional by any means but we loved it. This recipe adds sour cream which gives it a unique tang! I am going to give you the recipe with my tweaks and additions.
1 bag of No Yolk Noodles or some brand of broad noodles
2 tbl butter
1 lb ground beef
1/2 lb hot Italian sausage (I used hot Italian chicken sausage)
3 small cans (8 oz) of tomato sauce or a jar of your favorite tomato sauce
1/2 cup sliced mushrooms, I used Crimini
8 oz cream cheese
8 oz cottage cheese
1/2 cup sour cream
1 tsp thyme
1 tbl dried oregano
1 tbl dried basil
1/2 tsp garlic salt
1/2 tsp garlic powder and onion powder
1/2 tsp red pepper flakes
1/3 cup green onions chopped
1/2 yellow onion chopped
1 cup cheddar shredded
1 cup mozzarella or Jack cheese shredded
Cook noodles al dente, they should still be firm, I cooked for about 2/3 the recommended time, drain and rinse with cold water, set aside
Cook your pork and hamburger with the diced onions and the mushrooms until the meat is no longer pink, drain fat and return to the heat, add the sauce and the spices and simmer on low for 30 minutes or so
In the meantime combine the cream cheese, cottage cheese, sour cream and green onions
Butter a casserole dish and place a layer of the noodles across the bottom, I used half my noodles
Place half the cream cheese mixture on top then half the grated cheeses, then a layer of meat (save a bit of the grated cheeses for later)
Repeat ending up with the meat mixture on top
Bake at 350 degrees for 40 minutes or so, placing the remaining cheese on about 10 minutes before it is done. 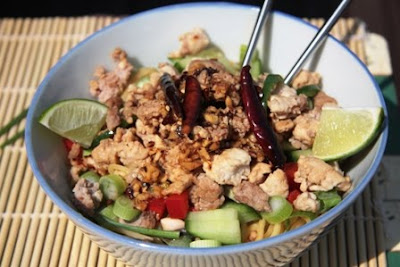 I had heard about Dan Dan Noodles on Yelp and really wanted to try them. We were at a local Chinese Restaurant and they had it on the Menu. The waiter kept telling us that if we were not Asians we would not like it, which frankly peeved me! My husband has been all over the world and eaten the most bizarre things!

We ordered it and it came with noodles and pork, that was it! We were both pretty sure it was supposed to have a bunch more stuff in it, I think our Waiter had the kitchen dumb it down and Americanize it! We then became obsessed with it and finding out how it is supposed to be made. We found many recipes and as usual my Husband took information from all of them and did his own thing! It was quite delicious and will be on our menu from now on!

Sauce: (make this in advance - up to 24 hours in advance if refrigerated)
3/4 c Chicken Broth

2 tsp chopped Pickled Vegetables (you can find this in most Asian Markets, we could not find a mix so we got the small jar of pickled cucumber and bamboo shoots)

2 tsp Chili Oil with chili's (if you don't have chili oil with the ground chili's in it, use the regular chili oil and add 3/4 tsp of ground chili flakes)

2 tbsp light soy
2 tbsp black rice vinegar (no substitution is recommended)
2 1/2 tsp dark soy
1 1/2 tsp dark sesame oil
1/2 tsp ground Szechuan peppercorn (which is not a pepper but dried prickly ash)
Mix all ingredients. When you are ready for assembly microwave until very warm.
Place the meats in a large non stick skillet or Wok, cook while breaking into small pieces with a spoon. Defat the meat while frying. (husband does this by tilting the skillet, push the meat to the high side and mop up grease with unscented paper towels).

Once the meat is beginning to brown up, drizzle in 2tbsp of honey and cook for about another minute getting a little more color. Remove from heat, add about 3tbsp low sodium soy and the 1tsp of Shaoxing mixing into the meat for added flavor. Keep warm
Get your water and bouillon cube boiling for your noodles, cook according to package directions. Toss in the bok choy when you have about one minute cook time remaining to give them a quick blanch. Drain noodles/veggies.

Assembly is very quick. While noodles are still piping hot, portion into bowls as the base. Add veggies, cucumber, scallions, red peppers and whatever else you're going to throw in. Pile on about 3/4 C of the meat mixture and start with ~1/2 C of the warmed sauce.
Garnish with peanuts and chili's as desired.
at December 16, 2011 5 comments: