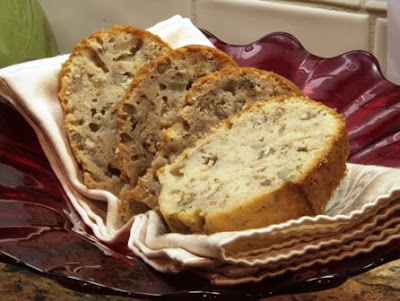 I bought a large sack of Bosc Pears from Costco and needed to use them up. I decided to make a Pear and Ginger cake. I found the original recipe here, and changed it up to add in lots of fresh Ginger and reduce the sugar.

I actually let the pears, ginger and sugar macerate overnight and it made for a really moist cake (lots of lovely liquid). I also learned from a Jewish Baker to bake your cake low and slow for the best results which this recipe does.

2. Preheat oven to 325 degrees F (165 degrees C). Spray a 10 inch bundt pan with non-stick cooking spray.
3. Slightly beat the eggs and combine them with the oil, chopped pecans and pear mixture.
4. Stir the flour, salt, baking soda, cinnamon and Pumpkin Pie Spice. Stir in the pear mixture. Pour batter into the prepared bundt pan. (I let my pear mixture macerate overnight and had to add about an extra 1/2 cup of flour to the mix or it would have been very runny)

Email ThisBlogThis!Share to TwitterShare to FacebookShare to Pinterest
Labels: Dessert 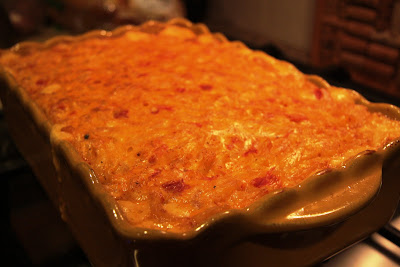 The minute I saw this recipe in my Cooks Country Magazine I knew I would have to make it. What a great combination cheese and tomato. I have to say it i s the most delicious, flavorful Macaroni and Cheese I have ever eaten.
The other thing that struck me (other than the fact it is full of fat), was that it was pretty expensive to make. I had to purchase all the ingredients, and the final cost to make the dish was $11.93 and that was me buying sale and store brand items. This versus the less than a dollar for Kraft Macaroni and Cheese.
It is cheaper to eat boxed, canned or pre-made meals than it is to purchase the ingredients fresh and make them yourself. That just seems wrong to me. As I was shopping I was comparing various items pre-made versus freshly made and it seemed to be a trend that pre-made is cheaper, thus the folks who are trying to make ends meet end up with those rather than freshly made and hopefully more healthful food.

Things I think about...

Bring 4 quarts of water and 1 tbl salt to boil, cook noodles until al dente, about 6 minutes. Drain pasta and return to pot.

Pour diced tomatoes with their juices over pasta and stir to coat. Cook over medium high heat, stirring occasionally, until most of the liquid is absorbed, about 5 minutes. Set aside. Meanwhile, melt butter in a medium saucepan over medium heat until foaming. Stir in flour and cayenne and cook until golden, about 1 minute. Slowly whisk in half and half and broth until smooth.

Bring to boil, reduce heat to medium and simmer, stirring occasionally until mixture is slightly thickened, about 15 minutes. Off heat, whisk in cheeses, 1 tsp salt and 1 teaspoon pepper until cheeses melt.

Pour over macaroni and stir to combine. Scrape mixture into a large baking dish (I sprinkled additional Cayenne pepper over the mixture) and bake until top begins to brown 15 to 20 minutes. 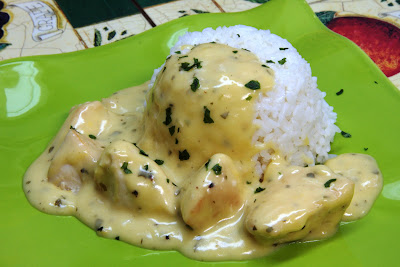 I spotted the original recipe on Agirlinthekitchen's blog. I loved the idea but changed it up a little for my tastes. It is a quick and very tasty chicken dish, wonderful for those busy weeknights. Serve with a salad or steamed veggies and you have a wonderful meal.

Preparation Instructions
Season both sides of your chicken with salt and pepper.

Heat a large skillet to medium-high heat and melt butter. Add your chicken to the skillet and cook until nice and brown and cooked thoroughly, (about 3 minutes each side.)

Add soup, lemon peel and juice, and stir well to incorporate with the drippings from the chicken. Turn heat to medium-low, cover the skillet and let simmer for about 5 minutes, stir every couple of minutes to keep sauce from sticking. You probably will need to add some chicken stock to thin the sauce out a bit.

Add the parsley, cover and simmer a couple of minutes longer until entire dish is completely heated. Serve with rice of your choice
at April 10, 2011 10 comments:

Email ThisBlogThis!Share to TwitterShare to FacebookShare to Pinterest
Labels: Chicken 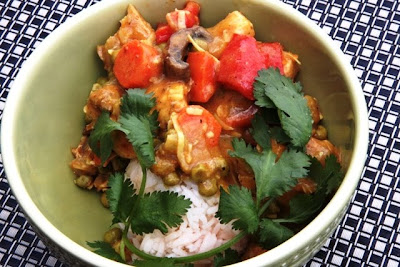 I have to admit I have not cooked Curry anything before, other than Curried Carrots. I saw a recipe from Tyler Florence, however it was way too complicated for me, so I used it as a guide and made it a whole lot easier and made it a bit more healthful by adding more vegetables.
It turned out quite good, I got a thumbs up from my husband and it is Gluten Free as well! One note, I would not use both red pepper flakes and a jalapeno again, it was quite spicy.
2 to 3 small chicken breasts cut into strips or chunks your choice (I did large chunks) 1/2 onion diced 1 red bell pepper cut into chunks 2 carrots peeled and cut into coins (microwave them for 3 minutes to help them cook faster)
4 tbl butter
1/2 cup green peas
1 Jalapeno seeds removed and diced
4 garlic cloves finely chopped
1 inch piece of fresh Ginger peeled and finely chopped
2 tbl t0mato paste (I used Catsup)
2 to 3 tbl Curry Powder of your choice (I used a yellow curry, next time I will use a red curry)
1 cinnamon stick
1/2 tsp red onion flakes (or none if you don't like it spicy)
2 cans of Lite Coconut Milk
1 cup of cleaned and sliced mushrooms
Cilantro for garnish
Jasmine Rice cooked
Place your butter in a large sauce pan on medium heat, add the onion, garlic and ginger, let cook for a few minutes then add the peas, carrots, jalapeno, mushroom and red bell pepper, sprinkle on your curry powder and cook for an additional 5 minutes, remove to a plate.
Heat your pan to high and sear off the chicken pieces, add the ingredients on the plate back into the pan and add your coconut milk, red pepper flakes, cinnamon stick and tomato paste.
Let cook until it has reduced, tasting along the way and adding more Curry Powder if needed. Remove Cinnamon Stick.
Serve over Jasmine rice with Cilantro garnish.
at April 03, 2011 11 comments: