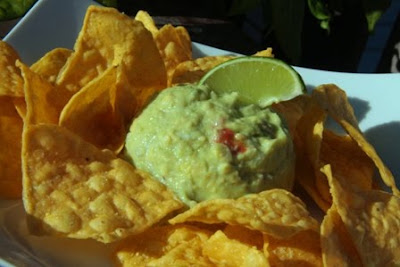 Recently the California Avocado Association via Foodbuzz offered to send me some of their awesome Avocado's to try. They arrived carefully packed and are absolutely gorgeous! They included an awesome little tool which makes cutting and removing the meat of the Avocado a breeze, Thank you!


The first thing I knew I had to make was my locally famous Guacamole. I know everyone has a different spin on how they make guacamole, I know I sure do! I am a garlic fiend so you will find at least two cloves of garlic in mine, tastes great and keeps the Vamp's away.


Cut your avocados in half, remove seed, remove the meat and dice well. Add in your other ingredients and mash mash mash, I like mine smooth, but if you like yours chunky go for it! 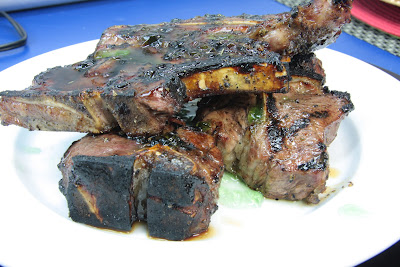 My husband and I are a big fan of Lamb, and just don't manage to eat it enough. I decided to make Risotto Milanese the other night and he wanted lamb with it. This is how he makes his lamb!

Marinate the lamb in 1/4 cup honey and 1/4 cup lemon juice, crushed black pepper, and rosemary, 1 tbl Mint Jelly watered down a bit, mix together and allow lamb to marinate on the counter for 30 minutes or so
Get some hickory chips going on your barbecue which you want on high heat, sear bone side down first, turn sear the other side till you get some color, remove from direct heat and leave on indirect heat till the lamb gets to your desired doneness. We like ours pink on the inside.

Remove add more apple/mint jelly, tent and let rest for a few minutes before serving
at May 22, 2011 13 comments:

Email ThisBlogThis!Share to TwitterShare to FacebookShare to Pinterest
Labels: Barbequeue 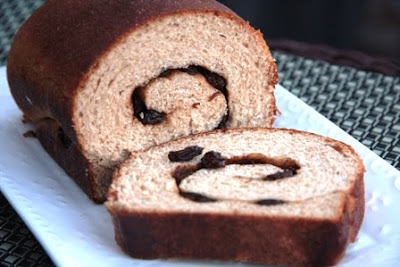 Over the past few months I have given up salt, white rice, white bread, cut down drastically on Beef, increased Organics, and have been eating a much healthier diet. In conjunction with my new eating habits I purchased some whole wheat flour (first in my lifetime).

I was dying to find a recipe using some of the Whole Wheat Flour and found this gem in one of my Food Network Magazines. It is low fat, low calorie and still quite delicious! My husband loved it and he is one picky eater!

Measure out 1 1/4 cups very warm water and check the temperature; it should be 120 degrees F to 130 degrees F. Combine both flours, the dry milk, egg, canola oil, honey, salt, yeast and warm water in the bowl of a stand mixer fitted with the dough hook. Mix 3 minutes on the lowest setting, then increase to the next highest setting and mix 5 more minutes. The dough should be soft and sticky.

Transfer the dough to a large bowl coated with cooking spray. Cover tightly with plastic wrap and let rise at room temperature until the dough has nearly doubled in size, about 1 hour, 30 minutes. (more like 2 hours)

Dry raisins will rob moisture from the bread, so soak them first in boiling water until plump, about 30 minutes. Drain and pat dry.

Transfer the dough to a floured work surface. Picture it as a loose square. Lift up one side of the dough and fold about one-third of it across; press down on the dough with spread fingers to remove any air bubbles. Repeat with the remaining 3 sides of the dough.

Mist two 9-by-5-inch loaf pans with cooking spray. Divide the dough in half; roll out each half into an 8-inch square. Brush each square with canola oil, then sprinkle with the cinnamon (it's high in antioxidants!), brown sugar and raisins.

Roll up each square of dough into a tight cylinder; place seam-side down in the prepared pans. Cover tightly with plastic wrap and let rise at room temperature until the dough fills the pans and springs back when touched, about 1 hour, 30 minutes. (again it took much longer 2 hours at least)

Preheat the oven to 375 degrees F. Brush the loaves with canola oil (I was naughty and used butter) and bake until golden brown, 20 to 25 minutes. Remove from the pans and transfer to a rack to cool completely

Email ThisBlogThis!Share to TwitterShare to FacebookShare to Pinterest
Labels: Bread 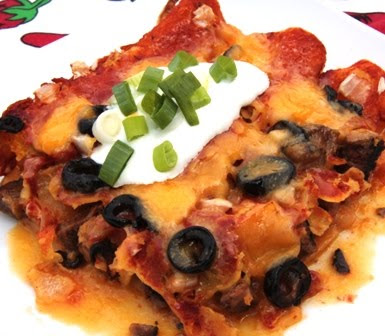 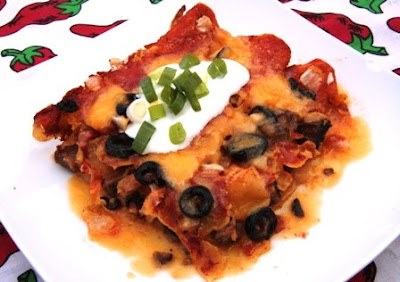 I had a beautiful leftover NY Steak that I wanted to use up in a way other than just re-heating it and eating as a steak. Hubby mentioned he wanted Mexican Food for dinner and it came to me, Steak Enchiladas!

I have never made them before! They are especially easy if you have a leftover steak, if not you can buy a steak, cut it into strips and quickly fry it in some oil. Be sure you don't fry until it is all the way done, you want it pink as it will cook further when you bake the enchiladas.

NOTE: I cut my cheese into logs to make it easier during assembly; you want half Cheddar and half Jack

In a bowl, mix the steak with a few tablespoons of the enchilada sauce for flavor, I also added a dash or two of Chili Powder

You are ready to assemble

Pour a small amount of the red sauce into the bottom of the casserole, spread around

Microwave about 5 tortillas at a time, 30 seconds or so, you want them warm enough to be pliable For the steak/cheese Enchiladas, place a line of steak down the middle of the tortilla, a cheese log or two, and roll and place seam side down into the casserole

Place the enchiladas tightly together

Email ThisBlogThis!Share to TwitterShare to FacebookShare to Pinterest
Labels: Mexican 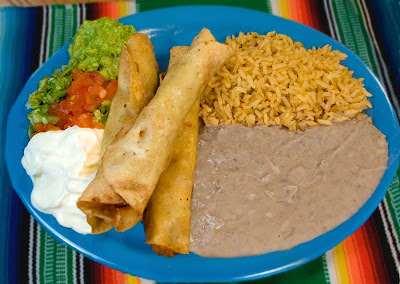 Chevy's is my favorite local Mexican Restaurant, the food is not all that authentic, but I love it anyway. One of my favorite items is the Fire Roasted Chicken Flauta's. I have been wanting to re-create them at home for quite some time. I finally did and WOW is all I can say, this recipe is a keeper!

It helps if you have a Chevy's nearby so you can help yourself and buy some of their salsa and chips which are amazing! This tastes exactly like the Flauta's at Chevy's and since they are baked, they are probably better for you! p.s. that is not my photo, I forgot to take one!
2 chicken breasts poached and shredded
Chevy's salsa or salsa of your choice
Fire roasted bell peppers diced (I did mine on the open flame of my gas stove)
Grilled Corn (same thing as peppers roast on the open flame and cut from the cob)
Flour tortillas (smaller size)
Mexican cheeses (your choice)
Crema (Mexican Sour Cream, you can find it at any Tienda or probably your local Grocery Store)
Jalapeno Jelly (sweet kind)
Jalapenos

Mix chicken and salsa until moist, add in the roasted corn and diced red peppers set aside
First heat your tortillas up on the microwave in a damp paper towel to make them more pliable

Pour a bit of crema down the middle of your tortilla, add chicken mixture on top, add cheese and roll up jelly roll style

Place on a raised rack on a baking sheet, coat with pan spray, cook until crispy about 8-10 minutes then turn over and cook for an additional 5-6 minutes or until crispy and golden brown.

Serve with the Chipolte Cream and the Pineapple Salsa in addition to the Jalapeno Jelly!
at May 01, 2011 19 comments: