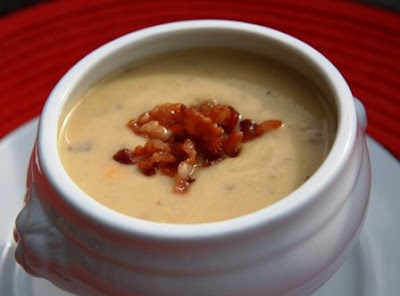 The chill of Fall is here and that of course means soup! I had the leftovers from a Roasted Chicken, so I made my usual Chicken Stock. In case you weren't aware, I have Chicken Stock Disease, (every time we eat a whole chicken I feel compelled to make Stock and freeze it). I am embarrassed to admit it, but at last count I had 11 gallons of stock in my freezer.

I have made Potato, Leek and Cauliflower soup previously and it was enjoyed by all, but I wanted to add Bacon and omit the Cauliflower this time, so it ended up being Potato, Bacon and Leek Soup and it was DELICIOUS!
3 leeks white and light green parts only, ends removed and sliced thinly
1 lb smokey bacon
8 cups chicken stock homemade if possible
3 russet potatoes, scrubbed and diced into cubes
1/2 pint heavy whipping cream
salt and pepper to taste
1/2 tsp dried thyme
several dashes Franks Red Hot
chives for garnish (optional)
Dice your bacon into small pieces and place into your soup pot, cooking until crisp, remove to paper towel
In the meantime, place your leeks into a bowl of cold water and swirl them around to remove the dirt, it will settle at the bottom of the bowl, remove and drain on a paper towel
Drain almost all of the bacon grease leaving about 5 tbl behind in the pot, add your leeks and sweat them until they have become limp and somewhat translucent
Add your chicken stock, salt, pepper and Thyme, bring to a boil, then add in your potatoes and cook until they are fork tender. Using a blender or an immersion blender, work the soup until it is smooth and creamy.
Add your heavy whipping cream and Franks Red Hot, bring to a simmer, ensuring the soup is hot.
Garnish with chives /and or additional bacon bits
at May 04, 2009

I could eat these hearty, creamy, warm soups even during the summer, I just love soups! This one sounds delicious :)

girl, you had me at bacon! is that the most magical ingredient for soups, or what?!?! i love this recipe, i'm definitely trying it!!

Mmmm...one of my favourites! Looks lovely...

So so so good to see you back here and what a terrific recipe to come back with! Sounds wonderful.Missed you.

the weather's already too warm here! :-( but I can eat that soup anytime, even if it's 90 degrees! LOVE it!

OOH! This sounds and looks awesome!

This sounds so good - almost like a baked potato in a bowl!

Wow - it sounds so rich and delicious. You just can't beat potato and bacon soup.

Smooth and silky, love the bacon in there.

Perfect soup recipe. Bella is so cute I love her.

Yum! This soup looks delicious. Who doesn't love a bit of bacon with her potatoes?! I'm definitely saving this recipe; I can't wait to try this out!

I need to embrace my inner leek more! I love them, but never think to include them! By the way, I'm getting a little upset with Blogger. I checked your site a few times on Sunday, and it did not show this post. It didn't come up on Reader either. This has been happening with other blogs as well (including when I load my own sometimes). I don't realize that a new post is up and then, bam, I'm more than a couple posts behind in responding. Anyway, this soup looks lovely and I would like more than one serving please!

Bella has a premiere role at the Pond Puppy Ball...check it out tommorow!

Just popped in from "for the love of cooking" I'm loving my visit and will be bookmarking. I must confess though, you had me on the irresistible urge to soup stock the carcass. I sometimes have more bones in the freezer then I do food! The recipe sounds yummy too! Thanks for sharing...

I thought my husband was crazy always wanting to make chicken stock, but it really is so much better than anything you buy at the store

What a terrific recipe Cheryl! It sounds like such a hearty soup. Love the bacon in it. It must make it so flavorful!

Bacon and potatoes go so well together - I bet this soup was amazing! I love the color of this tasty and hearty soup!

I love the looks and the sound of this soup and I bet you ten to one that I would love the way it tastes also... simply fabulous!!!

I love this kind of soup....yours looks great!

As you know I'm a big fan of leeks, and this is one of my favorite soups. Your recipe is a bit different than mine - but I know it was delish.

show this recipe this morning....sounds yummy making it today in my crockpot........