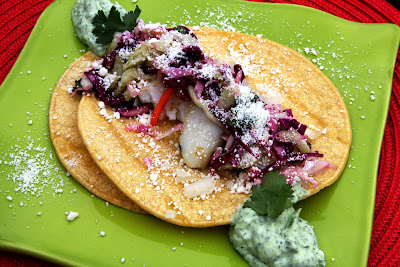 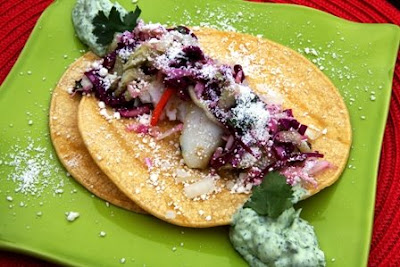 My video card is toast so Dessert Week is posponed until I can get access to my PC again!

In the meantime I give you Fish Tacos!
I am not a huge fan of fish, but recently have been trying fish taco's, I was quite surprised that I really enjoy them. The ones I have tried have all been fried, YUM.

My cholesterol poked me in the arm and suggested I try some that are NOT fried. Good idea! I went to my neighbor and fabulous cook's blog, For the Love of Cooking, I knew Pam would have a great Fish Taco Recipe and of course she did!
It was soo good, we gobbled it all up, there was enough for 1 lonely taco left over. No more fried fish taco's for this girl! I followed her recipe exactly, the only thing I did different was whip up a Cilantro Sour Cream Sauce!
Fish Marinade:
2 fillets of halibut, cod or tilapia (I used Cod)
Zest of one lime
1 tbsp fresh cilantro, chopped
1 tsp olive oil
Combine ingredients in a zip lock bag and marinate for at least 1 hour. Note: Don't add lime juice to marinade because the acid from the juice will cook the fish.
Salt and pepper to taste
Dash of paprika and oregano
1 tsp olive oil
Remove fish from zip lock and place on a plate. Season to taste with salt, pepper, oregano and a bit of paprika on both sides.
Heat olive oil in a skillet, once hot add fish and cook for 2-3 minutes per side or until tender and flaky.
Cilantro and Lime Cole Slaw Salad:
2 cups of green cabbage shredded (or buy the bagged cole slaw mix with carrots)
2 tsp olive oil
1/2 - 1 lime, juiced
1 tbsp fresh cilantro, chopped
Salt and pepper to taste
Dash of garlic powder
Make this salad right before you serve the tacos so it stays crunchy. Combine all ingredients until mixed thoroughly.
Cilantro Cream Sauce
1/2 cup cilantro
1/2 cup fat free sour cream
juice of 1/2 lime
salt and pepper to taste
Place the above ingredients in a small chopper or food processor and whir until combined.
Other Ingredients:
Corn or Flour tortillas
Cotija cheese
Grated Cilantro & Lime Cole Slaw Salad
Cook tortillas (dry) in a hot pan for 45-60 seconds on each side. You want them soft & pliable. Top the tortillas with fish, cilantro & lime cole slaw, and whatever else you like and serve
at April 05, 2009

Email ThisBlogThis!Share to TwitterShare to FacebookShare to Pinterest
Labels: Mexican

Fish tacos are one of my favorite foods. This recipe looks simple and healthy! And not to mention, delicious.

Oh no! Silly memory cards. Hope you get the problem rectified soon! In the mean time, these fish tacos look sooo delicious. This is one of my favorite ways to eat tacos!! Can't wait til dessert week rolls around.

I just love fish tacos, this looks like a great version. Looking forward to dessert week!

The fish tacos look totally yum...sorry to hear about the delay in dessert week, after talking to day and hearing some of your great ideas it has had me on pins and needles all day.

MMMMMM...Your version looks great too! Love it!! every combination, Cheryl!!

I like the idea that they are not fried. I eat way too many fried foods. Nice pictures!

Mmmmm. The cilantro sour cream would be PERFECT on these tacos. Thanks for trying the recipe - glad you liked the tacos.

I can't believe you didn't like fish before! but I wouldn't too, if they were fried. fresh fish with minimal cooking is the best!
that cilantro sour cream sounds wicked. kinda like my cilantro-coconut spread.

Mmmm ... I love fish tacos; they are so amazing! We eat a lot of soft corn torillas, and I usually microwave them; I should give the pan method a try. Your cilantro cream looks so good, too. YUM!

Lve fish taco, though I don't make it as often, when I do make it, every single one in my family just love it. I will make sure to include your idea of cilantro cream sauce next time. It sounds so delicious.
Cheers,
elra

I surprised at how good fish tacos are too. I will be making them again!

I've been dying to try these. There just hasn't been any good fish in the grocery store!

Hmm...never tried them. I am just learning to like some fish now...unless it once inhabited a shell, there wasn't much danger of me eating it...until recently, of course. LOL

that is a beautifully bright and vibrant dinner! mmmm.

I like the cilantro sour cream sauce. Fish tacos are a favorite of ours.

I like the cilantro sour cream sauce. Fish tacos are a favorite of ours.

Mmmm! Looks and sounds yummilicious! P.S. Maybe it's time I threw out the frying pan too. :-(