Greek Night at the Dunkin's 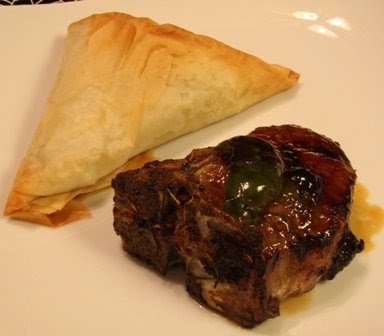 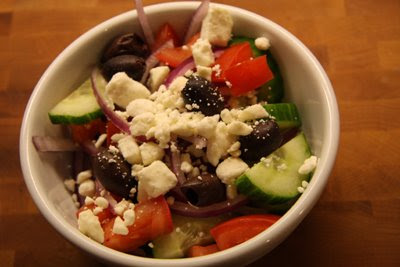 We were dying for some Greek Food and I decided were were having Greek Salad, Lamb Chops and Spanicopita. It was a great deal of work, but soo worth it! I made the salad and marinade for the Lamb and hubby did the Spanikopita! The photos are not great, we were too busy eating!

My Greek Salad recipe is here

Lamb: I marinated the lamb chops in the following and grilled on the barbecue

Heat vegetable oil in a large saucepan over medium heat. Slowly cook and stir onions, scallions and garlic until softened.

Mix in spinach and the spices. Cook approximately 10 minutes, or until most of the moisture has been absorbed. Remove from heat, let cool slightly

Place a small amount of spinach mixture onto each piece of dough. Fold phyllo into triangles around the mixture. Brush with butter. Repeat until you are out of filling.

Place filled phyllo dough triangles on a large baking sheet. Bake in the preheated oven 45 minutes to 1 hour, or until golden brown.
at November 04, 2008

well look at you ms. international cook! this looks just delicious! i love anything with feta :)

You're right about this being a Greek night - this looks fantastic!!! We just need a bit of saganaki to make it all better!!!

What a delicious meal! The salad is one of my favorites.

Looks like your meal was worth all that work. Looks delicious!

I am sure that you just forgot to call and invite me for supper - knowing how much I ADORE Greek food! looks fab! Much love, Raquel XO

This was a feast! That chop looks terrific; I just love lamb chops. That salad looks really crunchy and flavorful, too. I wish I were your neighbor!