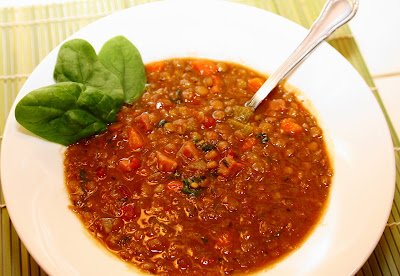 My husband LOVES Lentil soup, and I had never made it before, so I decided I would give it a whirl. I like my foods to be highly flavored, so I decided to create a Ham stock to use instead of water. It turned out spectacular, and had extra depth due to the Ham stock. YUMMY~
1 onion chopped
1/4 cup olive oil
3 carrots diced
3 celery stalks diced
2 garlic cloves, minced
1 tsp dried oregano
1 tsp dried basil
1 bay leaf
1 14.5 ounce can crushed tomatoes
2 cups lentils
1 ham steak, cut into cubes
8 cups water (I used Ham Stock, make it the same way as chicken but use a meaty ham hock)
1/2 cup spinach rinsed and thinly sliced
2 tbs vinegar
salt and pepper to taste

In a large dutch oven or soup pot heat oil over medium heat. Add onions, carrots and celery, cook and stir until onion is tender

Stir in lentils, water/stock and can of tomatoes, bring to a boil, reduce heat and simmer for at least 1 hour, add in ham anytime during the cooking.

When ready to serve, stir in spinach and cook till it wilts

Stir in vinegar and season to taste with salt and pepper

Sounds delish! Mom and I love lentils, Dad not so much. That is ok, more left for us!

Oooh yum! I'm a soup girl all the way, and this looks terrific! I love your idea of using ham stock. Your hubby is a lucky guy!

Great looking soup, Cheryl. It looks so thick and hearty I bet you could stand your spoon up in it. :-) Yum. Perfect for dunkin' some crusty French bread. I'm making myself hungry thinking about it.

BTW, I've given you an award, stop by the blog sometime and pick it up.

That lentil soup looks nice and vibrant and good! Using the ham stock was a great idea!