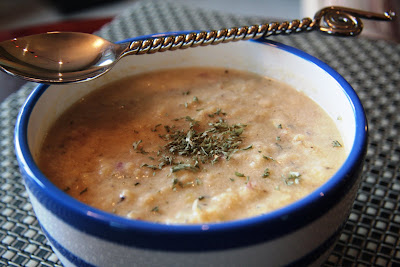 I have to say this soup does not look like much, and in fact the photo does not do it justice at all. It was a wonderfully flavorful and very rich and filling soup!

I took an idea from my wonderful neighbor and fellow food blogger Pam of For The Love of Cooking and used Evaporated Milk instead of heavy whipping cream and it still tasted very rich and decadent. Thanks Pam!

Place your leeks into a bowl of cold water and swirl them around to remove the dirt, it will settle at the bottom of the bowl, remove and drain on a paper towel

Add a few tablespoons of Olive oil to your soup pot and saute the leeks until they are translucent.

Add your chicken stock, evaporated milk, salt, pepper and Thyme, bring to a boil, then add in your potatoes and cook until they are fork tender. Using a blender or an immersion blender, work the soup until it is smooth and creamy.

I do think that the soup looks so tasty & comforting!!

That's a great idea to use evaporated milk! Yumm!

oh how yummy! i love this soup, and i love the way you lightened it up!

Hearty, filling, and tasty without all the guilt! It looks fantastic Cheryl. Thanks for the shout out & link. xoxo

Cream based soups never look like much, but they are heavenly!

Cheryl, your soup sounds delicious. We've had on again off again rain all day today. Soup will really hit the spot.
I hope you have a wonderful day. Blessings...Mary

That's a great idea to use the evaporated milk in the soup. I will have to give that a try. It looks very hearty and delicious!

I love Pam's blog!! She has great recipes. I like the idea of using evaporated milk instead because I'm always so afraid I won't be able to use up the whipping cream before it expires.

I love using evaporated skim milk to thicken soup - it tastes so creamy! (I'll leave the leeks out) but your soup looks delicious!

Mmm-mmm...an oldie but a goodie! :-) I love those thick, hearty winter soups - nothing as soothing & filling on a cold day!!

Just wanted to say also thank you for all your lovely comments on Honey's blog recently! :-)

Have a good weekend!

I don't like soups very much, but now I'm sick, I got a flu, so this could help me to recover my energy. I'm gonna prepare it at night before I go to sleep to see what happen.