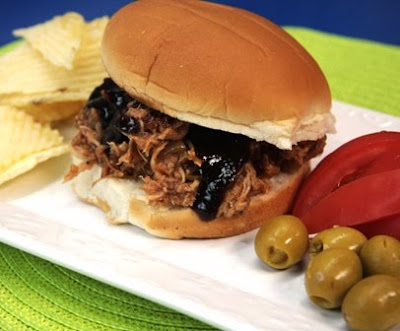 My husband smoked a Pork Shoulder last weekend and it was seriously awesome. He used this recipe, plus a bunch of other secret spices he isn't sharing. Instead of doing it in the oven like Guy did, he smoked it for about 12 hours. We used a vinegar mop for the first time and were very impressed with the results.

It was delish I must say, moist, smokey and succulent. The first thing that came to my mind for the leftovers was a Pulled Pork Sandwich. I made Cole Slaw to go along with it by copying the ingredients in a pre-packaged one I saw at Costco (which I will share later this week).
The combination of the tender meat, sweet and tangy cole slaw with some barbecue sauce on a soft bun was heaven let me tell ya!
at August 31, 2010

Email ThisBlogThis!Share to TwitterShare to FacebookShare to Pinterest
Labels: Barbequeue

That's my kind of sandwich! Pulled pork and cole slaw were just meant to go together.

Cheryl, this looks spectacular. Pulled pork is a favorite here. I hope you are having a great day. Blessings...Mary

i've never had pulled pork, but if that were placed in front of me, i would've gladly scarfed it down.

mouth watering... i have to go mop up now.

This smoked pork sounds really amazing Cheryl. Good job to your husband, he can cook, wow!

Oh my husband would just love that. His favorite is pulled pork....sounds delicious!

Girl, that is the way to do it! Now, make some pintos and pile the cole slaw on top. Oh sooooo goooood, too.......

I love pulled pork. There's not a lot of places that make it around here...

I can & will believe you on that! I never had pulled pork before in my life. You don't see that over here.

Your recipe & the secret ingredients must make this tasty sandwich taste divine!

just the name "pulled pork" gets my mouth watering! this looks so good!

i. love. pulled. pork. i enjoy a good burger, but i think my meat of choice is pulled pork, and that's the truth!