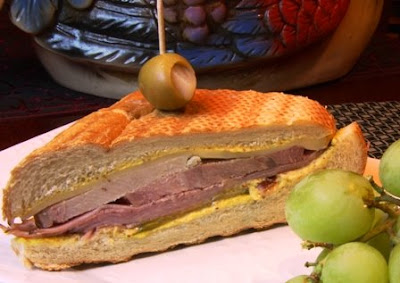 I have often heard of the infamous Cubano Sandwich, and actually had one once, it was as delicious as I had expected. As I was thinking of how I could use up some of our leftover smoked pork roast, I decided a Cubano Sandwich would be just the ticket!
I checked out a few recipes on the web for direction and went to town. It was delicious and great for a change of pace! I made one big sandwich, cooked on my Paninni Grill, and cut it into lunch sized portions. 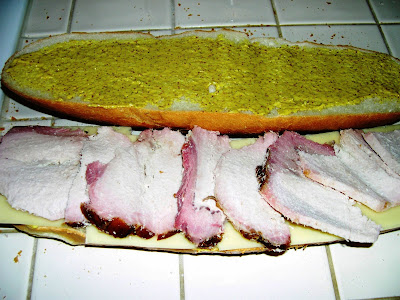 Layer your slices of cheese, pork, ham and Dill Pickles

Place on your Pannini press until cheese is melted (you could bake it in the oven with something heavy pressing down on it, as an alternative)
Cut into pieces and enjoy!
at February 20, 2009

Email ThisBlogThis!Share to TwitterShare to FacebookShare to Pinterest
Labels: Sandwich

Cheryl- I love cubanos, however now I am in the mood for a reuben, why is that? This snadwich looks terrific. I really need to get off my lazy butt and break out my pannini grill. I'm coming to visit you, OK?

That looks so easy. :-) I don't have a pannini grill, would a George Foreman type work?

Never made this, but sounds so good to have after a long hike on Sunday. I know what you're thinking, the hike for me is more of an outing then exercise (smile).
Cheers,
Elra

How funny. I just recently ate my first Cuban sandwich and I can't wait to make one here at home. It looks great - love the olive on top.

That looks good. Something I can bring to work for lunch!!!

Ahhhhhh! I love this! How's this for a coincidence ... I was just getting ready to post my cubano's!! Great minds think alike ... and eat alike, too! I love yours. Love it, love it, love it. What a great idea to plank your bread, and I'm totally envious of your panini grill (I used a cast iron pan on top of mine to weight it down). Those grill/grid marks on your sammie are lovely. That olive on top is a clincher, for sure. YUM!

That looks so good! I've got the biggest craving for one of those now...

i love cubans! anything with pickles makes me happy!! yours looks DELICIOUS!

I love cuban sandwiches. I made a recipe from Everyday Food for cuban quesadillas, that was good too!

This Sandwich looks Great !!! I really need to get one of those grills. Good Job Sis !

Mmmm...I wish I could get good dill pickles here (sniff, sniff)...Kiwis like everything sweetened (yuck) so I may need to start making my gramas homemade pickles with dill, garlic & hot peppers (they were the best I've ever had!).

That looks like one hell of a butty, Cheryl. Butty is northern England dialect for sandwich, the wooftahs down south call them sarnies. Just thought you'd like to know that smidgen of useless information. :-)

That sanswich looks so delicious!!! MMMMM...

Sound great I can taste all the flavors now must try. Can't wait.

Oh yes I ADORE cubans! It's literally the only thing I use my George Foreman grill for!